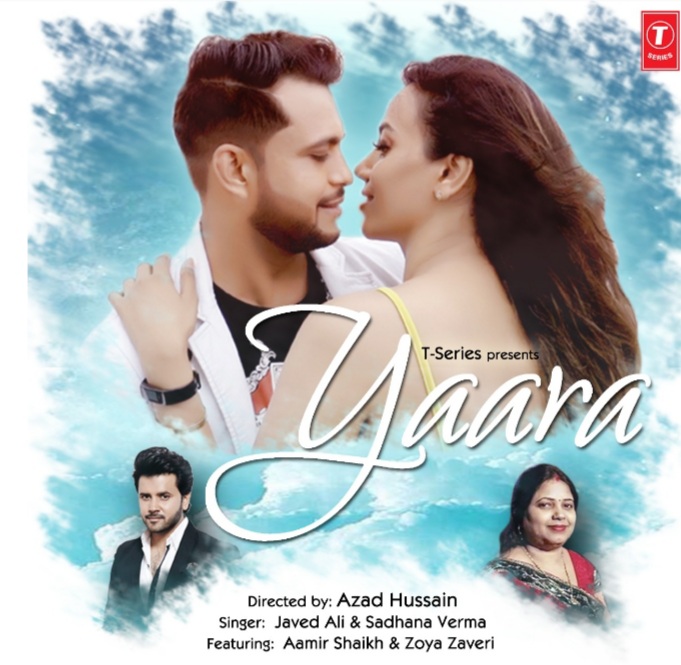 Javed Ali and Sadhna Verma has now sung a chartbuster number Yaara released under the
T-Series Music.The good looking star pair of Aamir Shaikh and Zoya Zaveri can be seen in the video shot for the song Yaara, which is making a lot of waves of late
Javed Ali and Sadhna Verma have added lustre to the song with the mellifluous and sonorous voice, the video of which has been shot brilliantly by director Azad Hussain on Aamir Shaikh and Zoya Zaveri. Though the song begins with Aamir Shaikh’s voice, Javed Ali and Sadhna Verma take the song to its culmination with their voices . The song has been shot at picturesque locations and make you feel that the song ought to be a part of some big banner star studded film. While Aamir Shaikh looks handsome in the number, Zoya Zaveri looks bewitching and attractive and steals the thunder. It may be noted that Javed Ali is today revered as one of the big A grade playback singers in Bollywood with hit songs in hit films like Naqab, Ghajini, Jodha Akbar, Yuvraj, Dilli 6, Robot, Ranjhana, Dabangg 3.
Javed Ali has also served as one of the star judges in reality shows like Indian Idol and Saregama while Yaara is Sadhana Verma’s second song, after she had made her debut earlier with the song Apni Kahani also brought out by T-Series. The song Apni Kahani was appreciated by the listeners and also bigwigs in Bollywood showered love on her and her voice in a big way. The song Apni Kahani was sung by Shahid Mallya and Aamir Shaikh too along with Sadhna Verma. The song had also garnered a million views and become extremely popular when it was unveiled. According to Sadhna , the entire credit for her phenomenal popularity ought to go to her husband Santosh Verma and her family support and says that the immense support extended to her by her husband is just unimaginable.
It is worth mentioning here that Aamir Shaikh is a besides being a good singer also an award winning sound engineer and has done the recording, mixing as well as the mastering of several songs in Bollywood like for example, films Bodyguard, Namaste London, Shakalaka Boom Boom, Apne, ect… and has been a singer as well as actor for many music companies like Zee, T-Series,Venus and Worldwide Records and this is the first song where Javed Ali’s voice has been picturised on Aamir Shaikh.
Zoya has already been a ramp model, catalogue shooting, print and calendar shoots. Zoya has acted in a music video called Nayi Nayi Aashiqui for Sony Music. Zoya had also acted for Zee Music’s Tera Hone Chala which also elicited a terrific repons. Zoya has also acted in a leading role in South film as well as a web series for Red Prime, which is slated to release very shortly.
Each and every member of the team has worked very hard on the music video and hence it is no wonder that heaps and heaps of praises are coming in the way of the makers of the video which is increasing day by day.