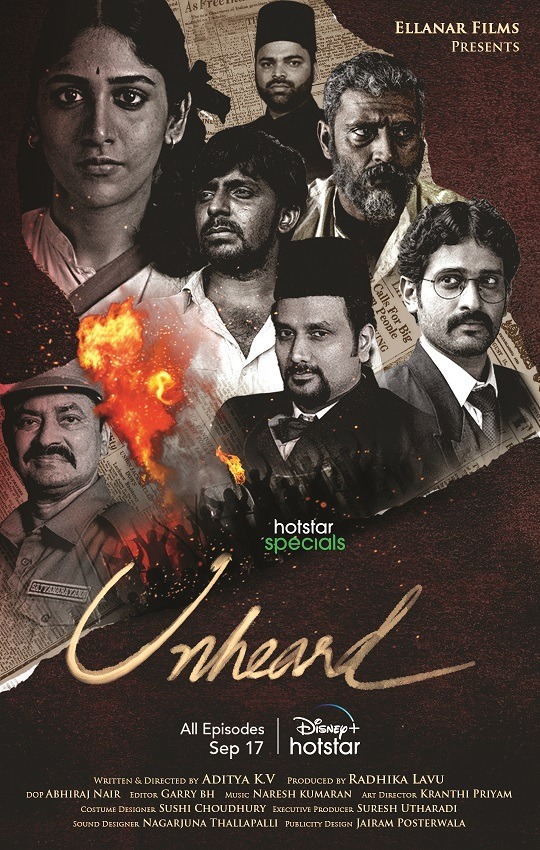 The conversational saga is now streaming online, and was an official selection for several prestigious international film festivals

The production house Ellanar Films announces the release of its period philosophical drama titled ‘Unheard’. Now available to stream on Disney Plus Hotstar, the project has already received international recognition. It was an officially selection of many coveted film festivals around the world, such as the 11th edition of the Dada Saheb Phalke Film Festival (DSPFF), the LA Independent Women Film Awards 2021 and Toronto International Women Film Festival 2021. A finalist at the Indian Panorama International Film Festival 2021, Unheard also garnered appreciation from the vice president of India, Sri. Venkaiah Naidu. It marks the second period drama for the production house, headed by Radhika Lavu, filmmaker of the famed Gods of Dharmapuri (G.O.D), a successful OTT venture that is one of the most streamed Telugu originals on Zee5.

Ellanar Films is known for its curation of critically acclaimed content, and its last offering G.O.D was a commercial hit that also garnered rave reviews with an IMDB rating of 7.9 Unheard marks Ellanar Films’ maiden venture into the philosophical period drama segment. Set in pre-independence India, it is a conversational saga, that explores themes such as freedom, communal harmony as well as the ideologies that constitute a nation.

It is written & directed by Aditya K.V, who is the author of mytho-historical book ‘Diatya Diaries’. Some of the artists to feature in this project include Chandni Chowdhary, Srinivas Avasarala, Priyadarshi, Ananda Chakrapani and Bala Aditya, amongst others.

Radhika Lavu, Founder & Managing Director of Ellanar Films said, “At Ellanar Films, we are continually creating a culture of creative excellence, by backing and executing unique scripts that can transform minds and change lives, through the power of the filmmaking medium. Unheard is a tribute to all the freedom fighters who made countless sacrifices for the country. As a production house, we have always aimed to tell timeless tales, that can instantly enthrall viewers. We are confident that Unheard will captivate the pulse of audiences everywhere.”

Unheard is the second period venture for the production house Ellanar Films and its next ambitious project post the success of G.O.D. Apart from its pathbreaking entertainment content, Ellanar is also noted for its out of the box advertising concepts and corporate films, nationally aired commercials for several brands.

Below is the link to the Trailer:

About Ellanar Films
Ellanar Films comprises of group of imaginative and out of the box story tellers who are passionate about filmmaking. What makes the production house unique is the ability to weave unforgettable stories. Ellanar’s expertise extends to domains as varied as short films, critically acclaimed OTT content, entertaining social media films, ad films, and corporate reels.
Its recent smash hit G.O.D, for which the production house partnered with Zee5, is one of the most streamed Telugu shows on the domain. It is known for bringing a relatively unexplored domain like crime drama, to the forefront on Indian OTT Platforms. Ellanar’s upcoming production ‘Unheard’, soon to be released is an equally riveting and refreshing tale. It is a historical saga, that narrates the Indian Independence Story from a fresh new perspective. Ellanar Films has also created nationally aired advertisements for many renowned brands such as Freedom Healthy Oil, Golden Harvest, Talwalkar’s, and others.

About Radhika Lavu
Radhika Lavu is a film producer with over 10 years of experience in the field. She is the Founder & Managing Director of the production house Ellanar Films, which has a vibrant team of creative and committed professionals. She studied filmmaking from the University of London to understand the finer details of film making and has incorporated the same into her work.
Her experience extends to a variety of domains, she has made 50+ documentaries for the State Government of Andhra Pradesh and created advertisements for nationally reputed brands. She received many accolades for her web series Gods of Dharmapuri (GOD) that went on to be become one of the most streamed shows on Zee5. The series is known to have changed the OTT Landscape for regional content and is known to be one of the first tales to experiment with the crime drama genre. She is now gearing up to showcase the Historical Saga Unheard to the world.