LATEST NEWS
Home Celebrities Getting trapped in a Spider’s Web 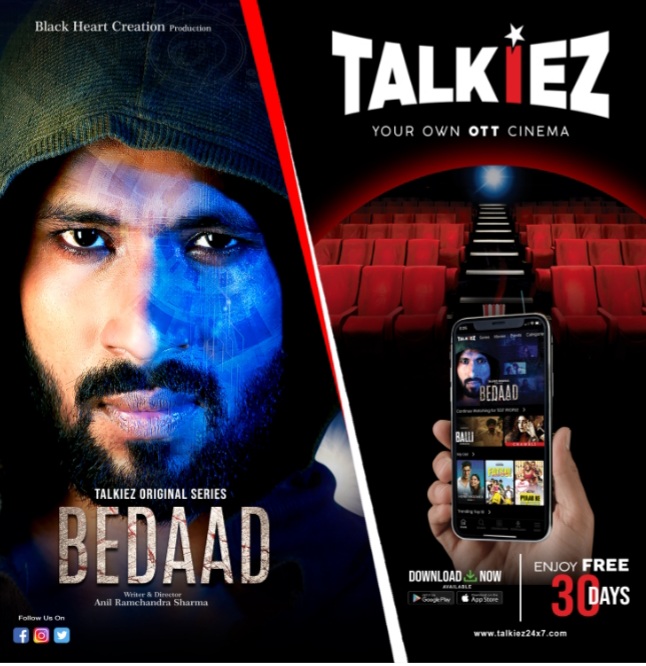 Getting trapped in a Spider’s Web

Getting trapped in a Spider’s Web

Genre: Thriller   Recommended: Parental Guidance   Released: 15 August 2021
Starring: Aryan Vikal, Peeyush Suhaney, Ritu Pandey
Directed by: Anil Ramchandra Sharma
Bedaad on Talkiez OTT platform
Bedaad is a psycho-Thriller, a work of fiction inspired by short stories written by Anil Ramchandra Sharma that is streaming on TALKIEZ a new OTT platform launched on our 75th Independence Day. The web series attempts to unmask the so called respected who are supposedly leading an ideal life in the eyes of our society.
Beginning with being felicitated with Best Couple of the Year – Adi Doctor by profession and his wife Apurva are confronted by a psychopath who traps them in their own house. During the course of experiencing being held as hostage in their own home, the couple begins to doubt each other about their past. While the wife thinks that the psychopath is either her husband’s patient or has something to do about his past, the doctor doubts if the psycho is connected to his wife’s past. 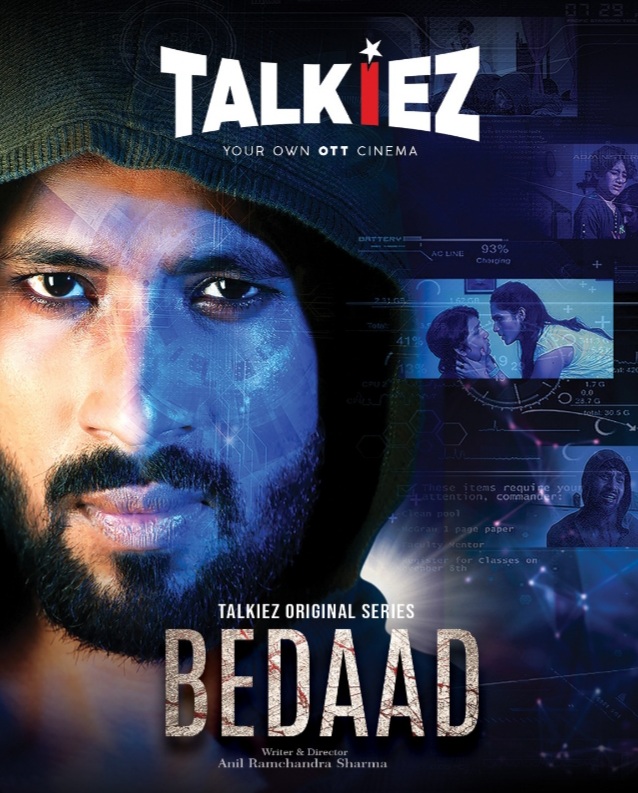 The game of wits and one-upmanship takes place when the cops on duty reach their house. In the meantime there are more revealations about the motive of the intruder in the house. The hidden back stories tumble one upon the other.
It is then justified that the psycho had a traumatic experience in his childhood. A can of worms us opened one by one. Thats fine, but what was the need for a raunchy item number in the so far gripping thriller? Just to degrade the men! The story begins to drag towards the end prophecising about how the able and powerful people can take advantage of the aam aadmi. In the introductory stages, Peeyush Suhaney and Ritu Pandey as the ideal couple appeared artificial, however as the story moves on, this doctor and professor couple begin to grown upon you. However one notch better is Aryan Vikal as the psychotic intruder plays his part convincingly and displays a promising future.
The highlight of the film is the meaningful choreographed number at the end of the story and it’s captivating music by Kaushal Mahavir. By the way, one should curb the animal instinct in our mind before it grows upon you!
Cast of Bedaad:
Aryan Vikal as Sonu / Rudra
Peeyush Suhaney as Dr Aditya
Ritu Pandey as Apurva (Doctor’s wife)
Shaji Choudhary as Inspector Harnek Singh
Tirth Thakkar as the child Sonu
Vikram Rathore as Sonu’s father
Anandita Sinha as Sonu’s mother
Karan Mann as Sub Inspector
Rajesh S Thorat as Sub Inspector
Aslam Beag as Constable
Uttam Gaikwad as Constable
Raju Kaysth as Ward Boy
Rashmi Kore as Nurse
Ashish Joshi as Driver
Credits of Bedaad:
A Talkiez Original Series
Production Companies: Black Heart Creators & I Am Eye Films
Team Talkiez: Shakeel Hashmi, Byju Nair, Yatin Rao
Produced by: Arya Novodit Vikal, Anil Ramchandra Sharma
Writer & Director: Anil Ramchandra Sharma
D.O.P: Vimal S. Mishra
Music: Kaushal Mahavir
Editor: Sandeep Kurup
Singer: Sunidhi Chauhan, Mohit Chauhan, Neelam Batra
Lyrics: Shakeel Azmi
Choreographer: Firoz A Khan & Raju Shabana
Sound Design: Pankaj P Turalkar, Nageshwar Rao Choudhary
Background Score: Monty Sharma
Editor: Sandeep Kurup
Action: Vikram Dahia.
Share 0
Tweet
Share 0
Share
Share